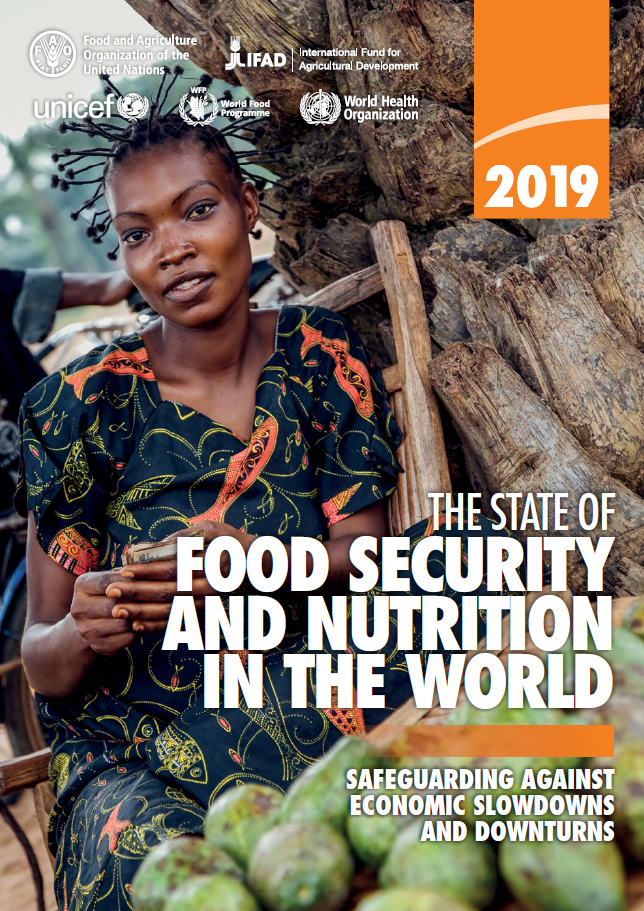 The 2019 State of Food Security and Nutrition in the World (SOFI) released yesterday, in NY, paints a dire situation of global inequalities. The number of persons facing hunger has again increased, and is now  at around 821 million persons worldwide, however with the new inclusion of the Food Insecurity Experience Scale (FIES) indicator and an assessment of moderate food insecurity, we have more thorough figures that shows that some 2 billion people face food insecurity globally.

This rise is deeply concerning, but not surprising. In a global climate of human rights regression and growing corporate power- increasing inequalities and food insecurity is inevitable.  It’s clear that all governments need to step up their policies and programs to address the structural causes of hunger. Yet the attention to human rights based strategies and solutions is limited at best.

While the problem analysis is improving, we are miles away from assessing real solutions.

The report featured a specific assessment on the impact of inequalities on food insecurity- which is an important point of progress, although far from the in-depth assessment that is needed in order to portray the impact from the prioritization of business interests over human rights.

As each representatives from the panel shared their assessment of the report’s findings, they were all clear to point out the rising inequalities, the need to target the root causes of hunger, and calling for a radical shift in solutions- a breath of fresh air compared to the normal discussions around SOFI. However, what started as a progressive front towards real systemic analysis and change, was followed by a call for greater role of the private sector and industry through increased investments, funding, and aid. No presenter called for stronger public policies, regulation of corporations, or stronger commitment to human rights.

The report creates a narrative in which the main drivers of food insecurity are conflict, climate change, and economic slowdown, which also fails to again reflect increased corporate interests, authoritarianism, xenophobia, and discrimination as a root cause.

Food insecurity is a global problem

For the first time the report also reflects that food insecurity, poverty and inequalities are not something limited to the global south- and that it’s clear that middle and high-income countries need to step up their policies, as well as their domestic human rights.

This is an important reality often ignored in global discussions. While the moderate food insecurity data is presented at regional level, data is still not given for individual countries- without such data, it is an unfortunate instance of allowing these countries to not take full, public ownership food insecurity at national level.
Additionally, the link between obesity and food insecurity in middle and high-income countries is an important indicator of poor quality diets, likely linked to the prevalence of cheap, processed foods- which are often the only affordable option for people with low-incomes

Where do we go from here?

As this report comes amidst a moment when its clear that dominant, industrial food systems are perpetuating hunger, as well as environmental, social, and cultural degradation,  the newly adopted the UN Declaration on the Rights of Peasants and Other People Working in Rural Areas (UNDROP) should be a guiding point on ensuring support to peasant agriculture, as the real means to feed the world in a healthy nutritious way and build sustainable territorial food systems.

While the report is objectively much better than past editions in terms of scope and analysis, there is still the need to rethink solutions and policy support. In this global moment of increased hunger, it is clear that we need to strengthen the role of the Committee on World Food Security as it is in the best position to assess root causes and develop solutions to hunger and malnutrition, make connections with other policy spaces, and ensure that those persons most impacted by food security and malnutrition have a voice in the decisions that affect them. It is disappointing to once again not see a clear call for policy guidance and monitoring support from this body in the SOFI report.

Last year we called for a human rights-based SOFI. While we are moving closer to a structural analysis, there is still a long way to go to ensure that the data and numbers lead to real change. High-level officials can continue to pledge change in New York, Rome, and Geneva- but until that translates into meaningful human rights-based action, we can expect the 2020 SOFI to reflect the similar regressive trends, and move further away from achieving the increasingly impossible goal of ending hunger by 2030.


*FIAN will undertake a more in-depth analysis of the 2019 SOFI Report findings and analysis, to be released in the coming weeks. For further inquiries please contact Mattheisen(at)fian.org