The war in Ukraine has made the food crisis triggered by the pandemic worse. People in Ukraine not only fear for their lives but are facing possible food shortages. Because Ukraine and Russia are major producers and exporters of agricultural commodities, the conflict is also having major impacts on global supply chains. The Ukrainian government has said that 22m tons of grain are stuck in the country due to the Russian blockade of its ports. Traders and financial speculators have further driven up wheat and cooking oil prices.

Not only are Ukrainian farms and fields being destroyed by Russian forces, but we are also very troubled by reports that Ukraine’s national seed bank has been partly destroyed amid fighting in Kharkiv in the north-east, where almost 2,000 crop samples rest in underground vaults. If Ukraine’s farmers cannot farm and the country’s seed banks are destroyed, its future is in peril.

Even in the midst of war, we have to think about recovery. Seeds are what make future life possible. Without seeds, it is very difficult to rebuild a food system.

The crop diversity present in farmers’ fields and seed banks are key to ensure we maintain the biodiversity necessary to respond to the climate crisis and ensure our food systems flourish. The global problem is not just the rising rate of armed conflict. A major problem is that more and more food systems are designed to reduce biological diversity, leaving us more vulnerable to climate change.

What are the solutions?

Biodiversity is nature’s way of creating as many options as possible to respond to change. The more biodiverse a food system, the more options we have to respond to quickly changing climate conditions. When a farmer selects the most viable plants for these new conditions, saves those seeds, and shares those seeds with other farmers, they are adapting our food systems to climate change in real time. Indeed, farmers’ seed systems, which have fed people for millennia, are defined by the continuous renewal of biodiversity and free distribution of seeds and knowledge among communities and peoples.

Unfortunately, many food systems treat food and seeds like a commodity where availability of food depends largely on global supply chains. Commodity seed systems are designed to ensure that a small number of players have as much control as possible over food production and nature. They favor uniformity over biodiversity. And they limit farmers’ ability to freely save, use, exchange and sell seeds.

Only four companies – Bayer-Monsanto, DowDuPont/Corteva, ChemChina-Syngenta and BASF – dominate 60% of the global seed market, as a recent report from the UN special rapporteur on the right to food shows. These corporations provide seeds through commodity seed systems, which are dedicated to the reproduction of homogeneous varieties dependent on chemical inputs and protected through intellectual property regimes. The very same companies control 75% of the global pesticides market.

This high concentration of corporate power allows a relatively small group to restrict people’s access to seeds, and to shape markets and research in a way that serves the ultimate goal of shareholder profit maximization and not the public good. This system creates dependency and erodes healthy, diverse diets and biodiversity. About 60% of all calories consumed worldwide come from just four crops: rice, wheat, corn and soy. Moreover, an alarming 75% of crop diversity has been lost over the past century due to the upscaling of industrial farming models, which are based on the use of commercial seed, synthetic fertilizer and pesticides.

Smallholder farmers (or peasant farmers as they are internationally known) and Indigenous peoples are stewards of the land and guardians of seeds. When their right to freely save, use, exchange and sell their seeds is protected, our food systems become more biodiverse and just.

We see how small family farms are a bulwark in this war. According to the FAO, they provide around 85% of vegetables, fruits and berries, as well as 70% of milk consumed by Ukrainians, thus making a critical contribution to ensure nutrition. Families fleeing from the cities to the countryside, rely on their neighbors for food. Peasants from neighboring Romania have activated their networks to provide vegetable and potato seeds to Ukrainian family farmers, to make sure that they can sow and harvest sufficient food for themselves and the rest of the population. This act of farmer-to-farmer solidarity should serve as a model to support localized food systems. Their primal aim is to provide diverse and healthy food for people – not producing agricultural commodities to sell in global markets primarily for profit.

One important lesson from the war in Ukraine is that the enormous work of peasant farmers in Ukraine and elsewhere deserves more attention. Peasant farming on small plots stands in stark contrast to the huge, industrial farms that have emerged in Ukraine over the past 10 years to produce commodity crops for export. Whereas enormous public and private funding has gone into making the country one of the world’s largest food exporters, peasant farmers have received little to no support.

We see in Ukraine, Syria, Yemen and other places with armed conflict that we must protect biodiversity and seed banks to ensure the right to food and a viable recovery. We also know more broadly that only if we protect Indigenous peoples’ and peasant farmers’ human rights and their right to save, use, exchange and sell seeds can we adapt to climate change and ensure that our food systems become more resilient and just.

This article was originally published in The Guardian on 13 June 2022 with the title "Ukraine helps feed the world – but its farmers, seeds and future are in danger" 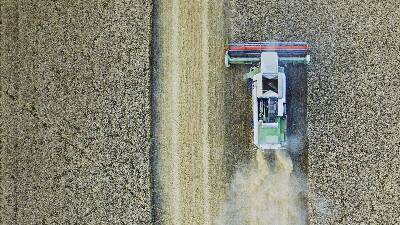