Last week the open-ended intergovernmental working group (OEIGWG) for a UN Treaty on transnational corporations and other business enterprises with regards to  human rights winded up its session number 5 after a week of intense discussions. Several States made significant contributions to polish the legal text of a revised draft, proving the increasing willingness to develop binding international rules that set legal liability of big business.

While discussions over the core text flowed with vivid exchanges, the scope of the Treaty remained most controversial. This will not only determine the types of companies the Treaty should apply to, but also which human rights it should cover.

“It is particularly difficult to obtain redress against the crimes of transnational corporations, and it is therefore key that the scope focuses on them. Corporate activity impacts the full range of human rights. This includes newly recognized rights such as the right to land and seeds, as echoed in the UN Declaration on the rights of peasants and other people living in rural areas. But despite all this generating a heated discussion, we have witnessed a step forward in the negotiations. In the sixth session States will have to further align on these topics,” says FIAN International Justiciability coordinator, Felipe Bley-Folly.

Some States bemoaned that the revised draft missed multiple observations and proposals raised in previous sessions by the wider civil society, including social movements and affected communities sharing their experiences on the floor. On this note, the Permanent Mission of Ecuador, in charge of compiling and facilitating the draft, was urged to re-consider some of this key content.

For the first time in 5 years, some EU Member States made concrete contributions to the wording of the text (namely Spain, France and Belgium). In past sessions, EU countries had only contributed as a block and have shown some reluctance to the process.

"This is positive, because it shows that they understand the relevance of negotiating international standards on this particular subject and are willing to contribute from either their own national regulatory experiences or based on reflections in their countries," says FIAN International’s Permanent Representative to the UN, Ana Maria Suárez Franco

On the last day, the states of Brazil and China, supported by Russia, suggested to remove civil society from negotiations. Fortunately this proposal went down in flames, as the EU, Cuba and Egypt, together with others firmly opposed this motion.

“As these States pointed out, these are intergovernmental negotiations, led by States, but counting on the valuable contribution by civil society. We will continue to monitor the process closely and will be ready to react for the coming draft,” concludes Stephan Backes, coordinator of the ETO Consortium. 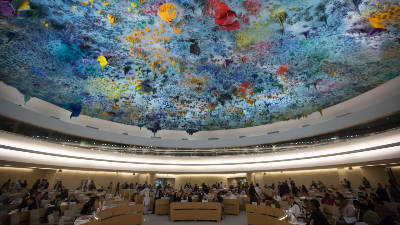